The Samaritan (1988) was Chaz Brenchley's first real novel, published under his own name. He told Gail-Nina Anderson how it came to be written (and answered the perennial question, where did the idea come from?). This is what the publishers said at the time: 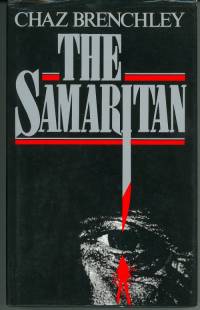 Paul Fenner is beginning to put his life back together. He's off the booze. He's writing a book about the incident which led to his highly-publicised resignation from the police. He's established a more civilised relationship with his ex-wife. He had a wonderful, supportive girlfriend. Although he doesn't want to push this new-found stability too hard, things are looking up.

The last thing Paul Fenner needs is to get involved in a murder case, particularly one as horrific as the 'Butcher' killings currently terrifying Newcastle.

But Paul is involved. When a friend becomes a victim, he has to be. The only clue he finds leads him to the Samaritans, and he confides his discovery to a senior worker there, David Linden. But Linden has some deep and dark secrets of his own ...

THE SAMARITAN is a novel of superbly-controlled suspense, richly imagined characters and a hauntingly good sense of place, be it the grimy urban north-east or the pastoral beauty of Wales. Chaz Brenchley has a fine eye for the telling detail and it is his ability to create a world of warmth, humour and affection - undercut by shocking violence and fear - that clearly marks him out as a major new talent.

"Skillfully and delicately handled, the depiction of an accelerating, relentless brutality makes this first novel from England an engrossing read... Brenchley constructs a truly chilling thriller, one that is not for the faint-hearted."

The Samaritan has been out of print for some time, but is now available as an unabridged audio download from Audible.com, read by James Warrior from Amazon UK and from Amazon.com.


Greetings,
Just curious to know how you chose "Paul Fenner" for The Samaritan ?


It was signed "Paul Fenner"


In the circumstances, an entirely fair question; and the answer goes like this. Originally, [the hero of The Samaritan] was called Paul Farrow, and Farrow he remained through all the drafts and all the rewrites, until the book was in proof stage. At which point I had a letter from the publisher's solicitor, saying that as the book was set so explicitly in Newcastle, could I please check that I hadn't used the names of real policemen or Samaritans in that city? No one likes being sued for libel, so of course I did. And the Samaritans were fine, no clashes; and then the police phoned, and they were fine too, except for one of the names on the list I'd sent them. They did in fact have a serving officer on Tyneside called Paul Farrow. Which in the circumstances - alcoholic ex-policeman, thrown out of the force for beating up a prisoner, etc - meant that we had to change the character's name pronto. And because it had all been typeset already, it needed to be more or less the same length of name to save upsetting all the layout and stuff; and I wanted the two syllables and the F at the start for the sake of the sound and rhythm of my sentences, which had all been composed around that sound, that rhythm; and so I came up with Fenner. I invented it, I made it up; I am outraged to discover that you actually exist. Just tell me you're not a policeman (too late to sue anyway, mind you, there's a three-year limit, so don't go joining up)...

Paul Fenner assured him that he is not now, and has never been, a policeman; in fact he works for The Waiter's Friend Company - enabling him to offer Chaz the very satisfactory gift of a corkscrew in exchange for his copy of The Samaritan. "Unfortunately," he adds, "I gave up early ambitions to pursue an acting career after a boring afternoon as an extra on the set of the first TV shoots for Dr Who, so cannot even offer celebrity 'character' appearances to promote the book sales..."

"You could have knocked me over with a blini-pan," said Chaz, when he saw the ballot paper drawn up by the city libraries to choose the book that best represents life in the north east, ahead of World Book Day in March 2003. The public were invited to nominate their own choices, but a shortlist of twenty suggestions was printed on the ballot paper. "I stood at the counter and ran my eye down the list, and I do believe I squeaked when I got to the bottom. Number twenty: The Samaritan by Chaz Brenchley. I didn't know that anyone still remembered The Samaritan. It was my first real novel, first book with my name on it, published fifteen years ago and long since out of print." It does still survive in libraries, though; I guess people must still be reading it.

The Samaritan did not top the ballot though: as Chaz predicted, the winner was Catherine Cookson's Our Kate.


Return to Novels or return to home page.